What is the Most Dangerous Food Additive?

Aspartame’s Dangers, Side Effects and FDA Approval Explained
Why This Toxic Sweetener is FAR Worse than High Fructose Corn Syrup...
The Newest Dangerous Sweetener to Hit Your Food Shelves...

A new study concludes that there could be negative consequences associated with artificial sugar substitutes -- including a much higher risk of strokes.
The study is somewhat controversial; some critics have argued that since the participants voluntarily reported how much diet soda they consumed, the results do not come from a rigorously controlled setting.
According to the Seattle Post Intelligencer:


"Researchers used voluntary participants to examine factors related to stroke and heart attacks. About 900 participants said they drank no diet soda, and about 160 said they consumed more than one diet soda every day."

These latest findings have not yet been published; the research was recently presented at the American Stroke Association's International Stroke Conference.
However, it's still worth paying attention to, as there are already hundreds of published studies linking artificial sweeteners like aspartame to serious health complications. Cori Brackett's documentary film Sweet Misery

-- is an excellent summary of the problems with aspartame. I believe it's one of the best documentaries out there on this topic.
This, however, is the first time diet soda consumption has been linked to an increased risk of strokes and other vascular events.

In this study, volunteers were followed for over 9 years. About 900 of them reported not drinking any diet soda, while about 160 reported drinking one or more diet sodas a day.  At the end, diet soda consumption, as well as salt intake, was linked to higher rates of strokes, heart attacks and other lethal vascular events.
In terms of salt intake, after close to 10 years, those consuming more than 4,000 mg of sodium per day doubled their risk of stroke compared to those consuming less than 1,500 mg per day.
As for diet soda, the researchers concluded that:

"This study suggests that diet soda is not an optimal substitute for sugar-sweetened beverages, and may be associated with a greater risk of stroke, myocardial infarction, or vascular death than regular soda."

While more research will likely be needed to confirm this potential link, there’s plenty of evidence showing that aspartame can be dangerous to your health. I believe aspartame is, by far, the most dangerous artificial sweetener on the market. Reports of adverse reactions to the US FDA also supports this, as aspartame accounts for over 75 percent of the adverse reactions to food additives reported to the FDA!

Acute reactions following aspartame ingestion, as reported to the FDA, include:
Studies have also linked aspartame consumption to a wide range of health problems, including but not limited to:

Pregnant women in particular need to beware of artificially sweetened beverages and foods as they can have an adverse effect not just on the mother, but also on the unborn child.
One of the most recent studies published on the health effects of aspartame revealed that daily intake of artificially sweetened soft drinks may increase the risk of preterm delivery by as much as 78 percent!
In response to these disturbing findings, some British public health experts are now advising pregnant women to avoid aspartame-containing foods and beverages to protect their unborn child, as preterm delivery exposes the baby to a number of health risks, not to mention staggering health care costs.
The researchers found that pregnant women who drank:
So please, if you're pregnant, or planning a pregnancy, please consider avoiding ALL sources of aspartame and other artificial sweeteners, and if you know someone who is pregnant, please share this information with them too. 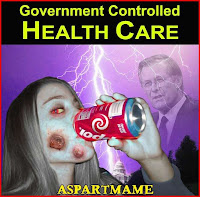 What Makes Aspartame so Dangerous?


Aspartame is made up of:
Each of these comes with its own set of health hazards, which you can read more about on my aspartame page. Additionally, diketopiperazine (DKP) is created as a byproduct of aspartame metabolism in your body, and DKP has been implicated in the occurrence of brain tumors.
Those who defend aspartame argue that phenylalanine and aspartic acid are a harmless and natural part of your diet. Indeed, both of these amino acids can be found in most of the protein foods you eat.  However, phenylalanine and aspartic acid  can only be considered natural and harmless when they are consumed in combination with other amino acids in the correct ratios and not as isolated amino acids.,
When they are consumed as free amino acids not part of food, they enter your central nervous system in abnormally high concentrations, causing excessive firing of brain neurons and potential cell death. This concept has been termed "excitotoxicity" by Dr. Russell Blaylock, a prominent neurosurgeon.
There are close to 500 scientific references showing how excess free excitatory amino acids, such as aspartic acid and glutamic acid (about 99 percent of MSG is glutamic acid) in our food supply causes serious chronic neurological disorders and a myriad of other acute symptoms.
Again, going back to the dangers of  aspartame during pregnancy, it's important to know that the blood brain barrier, which normally protects your brain from excess glutamate and aspartate (as well as other toxins), is not fully developed during the fetal period and childhood, so the risks are significantly magnified during that time.
Other high-risk categories include the elderly, and those with certain chronic health problems.

Are Your Health Problems Related to Aspartame Consumption?

You might not realize you're having a reaction to aspartame. In fact, most people don't make the connection, and a tremendous amount of time and money is spent by aspartame "reactors" (people sensitive to the chemical), trying to find out why they are sick.
To determine if you're a reactor, take the following steps:
For more information on the dangers of aspartame, visit http://aspartame.mercola.com/.