Based on the best selling book Angels Don't Play This HAARP, narrator Dr. Nick Begich presents a compelling discussion of one of the important military advances of the United States government.

The technology is designed to manipulate the environment in a number of ways that can jam all global communications, disrupt weather systems, interfere with migration patterns, disrupt human mental processes, negatively affect your health and disrupt the upper atmosphere. 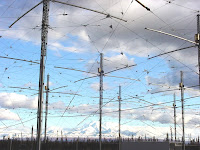 The U.S. military calls this new zapper the High-frequency Active Auroral Research Program or HAARP. The rest of the story is revealed in the patents, technical papers and other documents that continue to emerge regarding this project. Begich has presented on the subject as an expert witness for the European Parliament, Committee on Foreign Affairs, Security and Defense Policy Subcommittee on Security and Disarmament, GLOBE and others.

In a useful and important book, Manning and Begich have attacked many problems and told many stories. Best of all they have told how they and a gallant lot of nongovernment people in Alaska have fought battles to expose the HAARP project, which is the latest modernization of the Pentagon's electromagnetic warfare preparations, under test in the Alaskans' own backyard.

HAARP has been a mysterious project, whose true nature has been hidden, they say, by lies and disinformation. It has posed as university ionospheric research, which it only partly is, so as to conceal its military character. The great service that Manning and Begich have done is to uncover just enough technical and organizational information to leave no doubt about the centrality of HAARP to the Pentagon's aims of perfecting electromagnetic warfare

HAARP stands for High-frequency Active Auroral Research Program. It follows upon a long line of ionospheric research, some of it military, in which bursts of radiofrequency radiation have been beamed up into the ionosphere in order to study the effects so produced. Installations that send high intensity electromagnetic waves into the ionosphere have been called ionospheric heaters. Some have been in Greenland, the Pacific, Japan, Norway, and Russia. 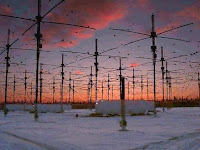 What is new about HAARP and should give grounds for concern is the much greater power level contemplated and the hugely greater power flux aimed at in the projected transmission. Scientists often study a system by perturbing it, observing the processes that take place during the recovery to the original state of the system. HAARP, however, promises to perturb the system so drastically that it may never recover to its original state, even assuming that it is stable enough that it returns to its former state under less drastic bombardment. Furthermore, the very scientists planning the research do not know what the results may be. If Manning and Begich are to be believed, the nuclear explosions carried out by the Soviet Union and the United States outside the Earth's atmosphere, prior to the 1963 Limited Test Ban Treaty forbidding such detonations, did in fact damage the ionosphere in the long term. For example, there is now radioactivity in outer space that wasn't there prior to the nuclear explosions, so that in this one sense at least, the ionosphere certainly isn't the same as it was. HAARP threatens to blast the ionosphere again, but possibly in a new and very frightening way.
HAARP-COMING TO A SKY NEAR YOU
Related sources:
http://www.scribd.com/doc/533366/Angels-Dont-Play-This-HAARP-Advances-in-Tesla-Technology-Manning-Begich
A History of H.A.A.R.P.
http://www.youtube.com/watch?v=qET05ubpMPs

HAARP - Now That You Know
http://www.youtube.com/watch?v=vSpt0WbKdUM

Dr. Nick Begich is the eldest son of the late United States Congressman from Alaska, Nick Begich Sr., and political activist Pegge Begich. He is well known in Alaska for his own political activities. He was twice elected President of both the Alaska Federation of Teachers and the Anchorage Council of Education. He has been pursuing independent research in the sciences and politics for most of his adult life. Begich received Doctor of Medicine (Medicina Alternitiva), honoris causa, for independent work in health and political science, from The Open International University for Complementary Medicines, Colombo, Sri Lanka, in November 1994.
He co-authored with Jeane Manning the book Angels Don't Play This HAARP; Advances in Tesla Technology. Begich has also authored Earth Rising - The Revolution: Toward a Thousand Years of Peace and and his latest book Earth Rising II- The Betrayal of Science, Society and the Soul both with the late James Roderick. His latest work is Controlling the Human Mind - The Technologies of Political Control or Tools for Peak Performance. Begich has published articles in science, politics and education and is a well known lecturer, having presented throughout the United States and in nineteen countries. He has been featured as a guest on thousands of radio broadcasts reporting on his research activities including new technologies, health and earth science related issues. He has also appeared on dozens of television documentaries and other programs throughout the world including BBC-TV, CBC-TV, TeleMundo, and others.
Begich has served as an expert witness and speaker before the European Parliament. He has spoken on various issues for groups representing citizen concerns, statesmen and elected officials, scientists and others. He is the publisher and co-owner of Earthpulse Press. He served as Tribal Administrator/Village Planner for the Chickaloon Village Council, a federally recognized American Indian Tribe of the Athabascan Indian Nation for five years and served four years as the Executive Director of The Lay Institute of Technology, Inc. a Texas non-profit corporation. Currently Begich consults for tribal organizations, private corporations and others in a number of research areas.
Dr. Begich is married to Shelah Begich-Slade and has five children and two grandchildren. He resides just north of Anchorage in the community of Eagle River, Alaska, USA.
http://www.earthpulse.com/src/category.asp?catid=13
Learning to 'Live Free' comes from experience and personal growth ... Lets break our conditioning!
http://www.livefreerevolution.com/
http://livefreerevolution.blogspot.com/
Posted by David Goliath at 11:29 AM